Why I bought a studio condo in Bang Saray, Thailand

In 2012 I started my Airbnb journey by renting out my apartment in Amsterdam. It changed my life. It provided me with enough income to travel the world and work on Get Paid For Your Pad, a business that I'm very passionate about.

Over the years, the city of Amsterdam has started to adopt even stricter regulations to limit the number of Airbnbs. Starting in 2017, hosts were only allowed to rent out for 60 calendar days a year. This led me to sell my apartment and invest in short term rental properties in other locations.

I've since purchased three properties. The first one was a penthouse in Cali, Colombia. The second one a studio villa in a resort in Carabao, the Philippines. This post concerns the third one, a studio in a brand new condominium building in Bang Saray, Thailand. I explain why I bought it, what my expectations were, and how it's panned out so far.

I had visited Thailand many times in my live and I was aware of the attraction the country has on tourists. I also knew quite a few people who had invested in the country. I had looked at real estate in Bangkok as well as Chiang Mai, a small city in the north that has become a major hub for digital nomads.

I was cautious to invest though. I had met plenty of foreigners in the land of the smiles who had made bad investments there. Stories varied from much lower than expected returns to buildings not being maintained well to projects not being finished.

Foreign investment had been flocking to the country for a long time, and it felt like real estate prices were already quite high. A lot of people warned me about real estate bubbles in popular places like Bangkok, Phuket, Koh Samui and Pattaya.

I felt like I would rather invest in an area that was relatively undiscovered and up and coming. In January 2018 I was advised on a project in Bang Saray, a small coastal town just south of Pattaya. This caught my attention for a few reasons. I had never heard of Bang Saray, which tells me it must be not that well-known yet. Secondly, I knew that the town is located in an area where the Thai government is investing heavily.

Development of the region

Thailand’s government has big plans in Rayong, the Eastern province where Bang Saray is located. As part of the Eastern Economic Corridor, they are planning to spend a total of 300 Billion Baht (about $10 billion) on a range of infrastructure projects. This includes the construction of a second terminal and runway at U-tapao airport, the development of a high-speed train from Bangkok and several upgrades to the motorways. In particular, the improvement of motorway no.7 will allow people to by-pass Pattaya and drive straight up to Bang Saray from Bangkok. Highway no. 331 will be extended to four traffic lanes, and a motorway will be constructed to link Pattaya, Map Ta Phut and U-Tapao Airport.

Last but not least, they are also developing a large industrial zone.

Watch the video below for an overview of the different projects in the region and government investments.

The new terminal building, together with the existing terminal, will pump passenger capacity from 800,000 to three million per year. Between 2018 and 2020, capacity is expected to increase to five million passengers.

When completed, this significantly increases access to the region and I expect visitors numbers to increase dramatically over the next five years.

As discussed in the section about my purchase in the Philippines, I expect the lion share of the growth in tourism in the next decade to come from China. U-Tapao already has almost 40 direct flight to China each week. In other words, the region is already on the Chinese radar and with the airport expansion the number of flights can be easily increased.

One risk factor I’m specifically wary of in Thailand is oversupply. Places like Bangkok and Pattaya have seen so much supply come on the market that I doubt anyone has seen their real estate appreciate much in the last decade or so.

Bang Saray is somewhat protected from this because there’s a building height restriction of 23 meters in place, which means condo towers can have a maximum of about eight floors.

The building is located just a short walk from the beach, north of the center of Bang Saray.

See below for the artist impressions of the building and the interior.

For more details, images and floorplans of the building see the Mirage website.

As you can see below, prices are higher for foreigners than for locals. The units below are the units that were still available at the time.

There are two major reasons that I opted for unit 705. First of all, it's the second cheapest unit that was left. Since there are risks involved in buying a pre-construction unit in a country that I have never invested before, I preferred to commit a small amount of money. At roughly $65.000, if all was lost, it wouldn't affect my life in a major way.

Secondly, I have a preference for top floor units. I personally like being on the top floor when I stay somewhere. I'm not exactly sure why, but it gives me a sense of freedom and makes me feel comfortable. I'll have to check with a psychologist at some point to understand this. Obviously the view plays a role as well.

However, I'm paying a price for being in the top floor. I could have bought a one bedroom unit that's 50% bigger than mine for just an extra $10.000.

Other than my personal preference, I have to consider as well what would command a higher price on Airbnb. 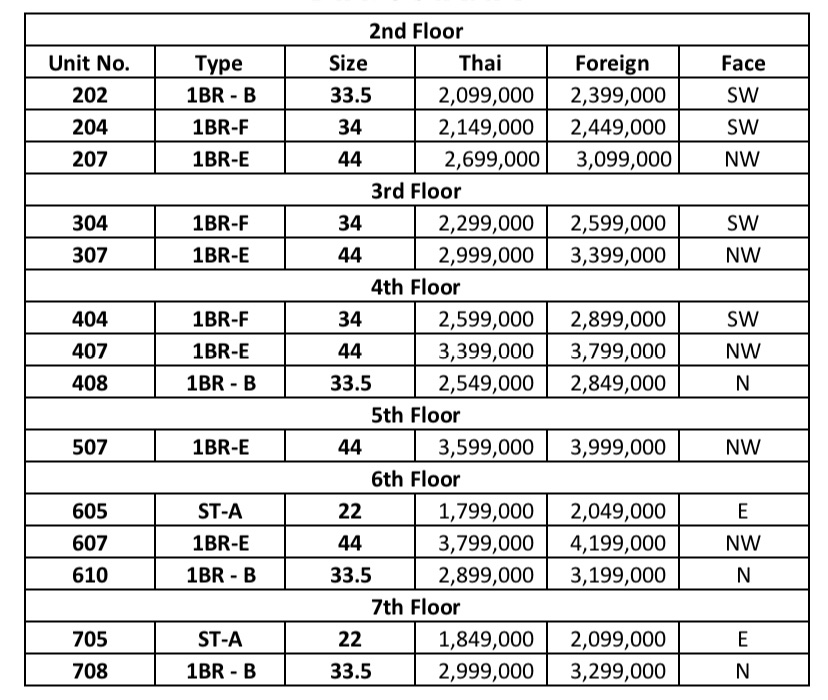 Assuming 20 days a month occupancy (66%), that means my average daily rental rate (ADR) has to be $40. Is that realistic? Let's look at the market.

These are either studios or 1 bedroom apartments situated in a similar location and with similar amenities. They are priced between $43 and $63 a night. None of them are doing very well on Airbnb and none have a good amount of reviews, all between zero and five.

This is good and bad news. The good news is, I'm not competing with top rated Airbnb hosts with hundreds of five star reviews. The bad news is, there may not be much of a market for this type of accommodation at these prices.

My guess is that these hosts just aren't doing a very good job though. I doubt that at a touristic destination like Bang Saray I won't be able to do well on Airbnb. However, I may have to start with lower prices.

Now let's take a look at hotel prices on Booking.com. 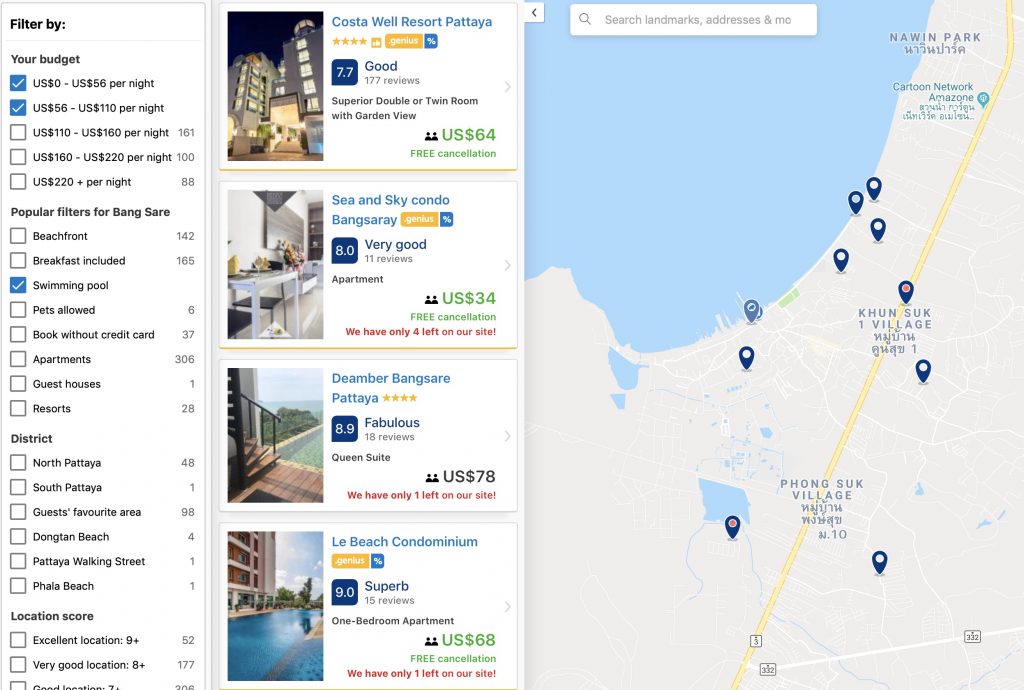 Honestly there's some really affordable options here, starting at $34. A lot of these options are either apartments or villas, and the rooms listed tend to be quite large, 20 to 35 sqm.

I looked at other websites as well, but to keep this post concise I didn't include all the research. The bottom line is this:

* There are good alternatives for similar accommodation around the $40 price point, and in the $50 to $70 range much better options are available such as large apartments and entire villas.

* There are no listings on Airbnb that are crushing it, which means there is room for me to claim this space.

Based on these observations, I think I may have to charge on the lower end of my range, around $30 to $35 to be competitive, at least the first few months. Once I have 25+ five star reviews, I can probably increase the price to $40.

The profitability doesn't look great, there's a good change I won't be able to hit my 10% goal in the first year. Over time I do expect to hit it.

As with my other investments, I look at three deciding factors when it comes to the purchasing decision:

Absolutely. You can't really go wrong with spending time in a tropical beach resort where you can enjoy delicious Thai dishes for a few bucks a meal. Given the proximity to Bangkok Airport, 1.5 hours by taxi ($35 – $40), it's easy to get to, as Bangkok Airport has direct flights to most cities in Europe and even the US. This means that if the occupancy isn't great, at least I can enjoy my studio during the times it is not rented out.

Maybe. Probably not at first, a 7 to 8% ROI seems more realistic. Over time probably yes, but it won't be much more than that. The upside is limited, unless the region starts booming and hotel prices rise.

Considering the three decision factors, this investment wasn't a screaming yes for me. There's a few reasons why I did end up going ahead with it.

Before I wire the money though, I need to do some due dilligence to make sure I'm not walking into some sort of scam. I wouldn't be the first one to do so.

Here's an overview of the due dillengence I did on the developer and the person in charge.

I coudn't find any reasons to be suspicious. This means the company is legit or they are very good at faking it. This in combination with the fact that I have known the person promoting this project since 2012, I felt comfortable enough to send over the cash.

Below is a price list of units that are still available. 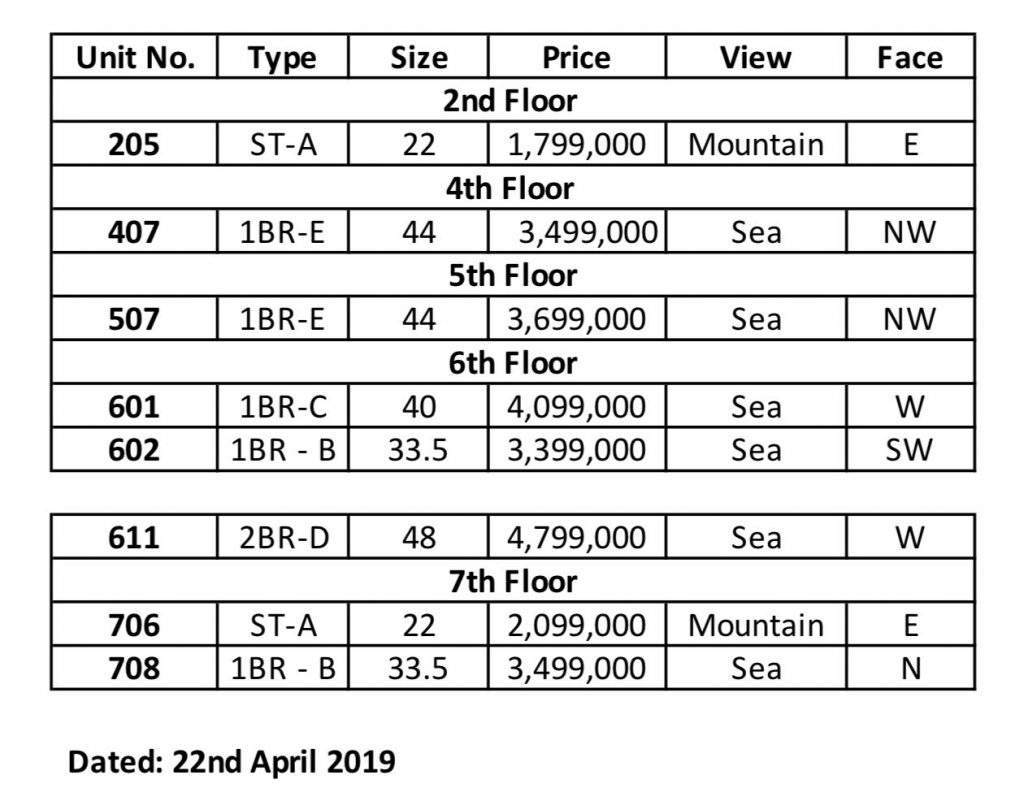